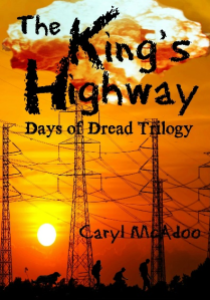 Greater love hath no man than this, that a man lay down his life for his friends. John 15:13

In The King’s Highway, book one of the new Days of Dread Trilogy, an Electromagnetic Pulse (EMP) is detonated over Kansas, rendering all electronics useless. Airplanes fall from the sky, and cars and communications die.

I wrote this story in 2013. Yesterday morning, I listened to an online video produced by Nathan Shepard, a Bible scholar with a background in theology and archeology about the end times. ( http://survivetheenddays.com/asm_i3/?t=  ) He gives scriptural evidence to back his beliefs that Russia will explode an EMP high in the atmosphere over mid-U.S. (Kansas?) to throw our country back into the dark ages—exactly as written in my scenario…two years ago!

Here’s my jacket copy on my new book:

A mysterious dead man directs the small band on their journey to a much safer corridor he dubs The King’s Highway.

Airplanes are falling out of the sky, and all things electric rendered useless after a mysterious flash. It tests the grit of fifteen-year-old Jackson Allison when the care and safety of his younger siblings fall solely to him. No one knows for sure what’s happened, but danger lurks if they stay. With a fierce determination to keep his thirteen-year-old sister McKenzie and nine-year-old brother Cooper safe, the high school freshman is compelled to leave their Irving home in the shadow of the DFW Airport for their grandparents’ farm a hundred-plus miles northeast.

Thrust into a lawless, chaotic world, he’s guided by an ever-changing cryptic note that leads his growing troupe along the King’s Highway. Bullies, Russians, wild animals, gang-bangers, and kidnappers thwart their progress while a lack of drinkable water and food is a constant concern. Will he ever get his people to safety in the Red River Valley in far Northeast Texas?

One Zonderkidz editor asked me, “Why would you write an end times dystopian for mid-grade?” My answer was to bolster the faith of young people that God will keep and guide them through any situation, providing their needs. I wanted to replace any fears with faith ahead of time through my fiction story.

An avid reviewer and reviewer told me she hoped the “possible look into the future” wasn’t prophetic, yet Mister Shepard at ‘Survive The End Times’, who I’d never heard about before now, has basically come up with the same developments as his truths. Here’s what she said about it:

“This first novel in the Days of Dread Trilogy fits the mid-grade classification in that the chief characters are mid-grade children. It is so much more than a dystopian story since it fits so well into the quest genre. Just as C.S. Lewis’ “The Chronicles of Narnia” are much more children’s novels in that they are dearly loved and read by adults worldwide, even so “The King’s Highway” takes the adult reader hostage and keeps them enthralled to the very end, a point when they will want more story.

This book is so well written and edited that the critical eye of this reviewer found not one typo or mistake. For sure, every detail in the world Caryl McAdoo depicts fits perfectly with the projected future environment after another world war. It is to be dearly hoped that the author isn’t being prophetic in the scenario depicted in this book. Here’s looking forward to the next book “The Sixth Trumpet” due out hopefully before the Lord returns.

I read this story in an advanced reader copy and am under no obligation to provide a positive review.  –Cassandra Wessel, multi-published author and avid reader

I hope you’ll read The King’s Highway and judge for yourself!

Whether fantasy fiction or prophesy, reviewers of all ages are loving the story which I am thrilled to launch right here at CelebrateLit! I’m so excited about my blog tour from its awesome organizer, Sandra Barela! She’s just tops, and I am so blessed that God brought us together! She knows how to help spread the word about my newest release The King’s Highway.

It’s my pleasure to offer not one, but TWO free paperback copies of The King’s Highway—one for you, and one for your friend—in honor of Sandy and friendship!

I also want to thank every blogger who has signed on for this fun adventure! Hope you all have enjoyed The King’s Highway, and that you’ll be blessed of God for helping this daughter!

For more information about this book and to enter the giveaway click here.